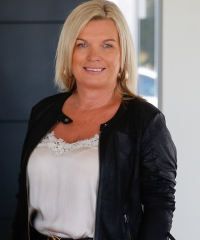 Over eighteen years in real estate has not slowed high-achiever Jacqui Taylor from selling the best of the Bay.

Joining New Zealand Sotheby’s International Realty at it’s launch into the Hawke’s Bay market in 2012, Jacqui spearheaded the business to quickly establish itself as the leading agency in the mid to high end residential market across the region.

Jacqui is no stranger to awards. After embarking on her career selling premium coastal properties in and around Mahia Peninsula, within a year of moving to an established team in Napier, Jacqui quickly became the top residential agent, her results speaking for themselves.

Slowing down is not an option. Real estate is a career which Jacqui gives 100 per cent commitment to. Often with the recommendation of Madison's Homestyling, Jacqui has formed an experienced, tight-knit team continuing to drive sales through superior marketing with premium results.

“Helping people achieve their dreams is very addictive – people want to put the sale of their biggest asset into the hands of someone experienced, who will expose it to the broadest possible market and do the best job,” she says. New Zealand Sotheby’s International Realty allows a client’s property to be presented truly globally, while locally our aim is to present homes to the market better than anyone else”.

Located in the Tuki Tuki Valley and accessed via a private road, this unique lifestyle property boasts incredible north-facing views over...

Located down a private road this architecturally designed home offers a classic and timeless masterpiece maximising the northerly aspect...

Located in Ahuriri this two bedroom seaside cottage centred on 483 sq m site only one street back from the waterfront will have high appeal...

A stunning renovation has been completed on this coastal property creating a family oasis sure to enable lots of fun. On entry through the...

This incredible property is finished to the highest standard using top quality materials. One of Hawke's Bay's most impressive...

Close to the heart of vibrant Ahuriri, this two-level freehold townhouse located in the gated community of Nelson Quay, maximises views...

A fantastic opportunity to secure this fabulous family residence located high on Bluff Hill in an area of high value homes and in the good...

Located in Eskridge, this executive residence built in 2009, where extensive glazing takes advantage of expansive ocean, rural and city...