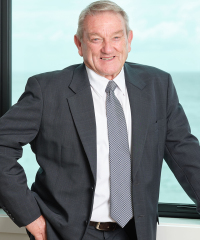 Clive began his real estate career on Waiheke Island 23 years ago when he won the company New Zealand Rookie of the Year, and the following year exceeded that by winning the nationwide REINZ Rookie of the Year. Consistently a top performer in his field, Clive has achieved close to $300,000,000 in sales and his wide reaching personal database reflects his success.

Clive has a personable and engaging approach with both vendors and purchasers which has won him many friends over the years, together with his no-nonsense and friendly attitude. Having owned property on Waiheke for 48 years, Clive’s profile is far reaching and he’s actively involved in the local community sponsoring numerous events. You may have heard of his son Dean Lonergan, a successful sports promoter. Clive is dedicated to his family and attends almost all of Dean’s local and international sporting events.

Clive has a particular talent for building rapport with both vendors and purchasers and has a strong after sales ethic and desire to go the extra mile. In his third year of partnering his business with Lisa Hopewell, they each bring their individual skill sets and experience and work in synergy with their Personal Assistant, Shakila Bell. As a team of three they have impressive resources and their aim is to exceed expectations of service.

This large, sunny and level site of 1,685 sq m (more or less) is a rarity on Waiheke Island and highly coveted. The ability to build up to...

Drink in the outstanding sea views from this bright, contemporary, north-facing home. The blissful vista takes in the Sandy Bay shoreline...

Will Not Be Sold Before Auction If Burrell Road Extension was a chocolate box, this would be our best pick. At the northern end of this...

The opportunity to secure a fabulous house and neighbouring section that connects directly to one of Waiheke's most popular north-side...